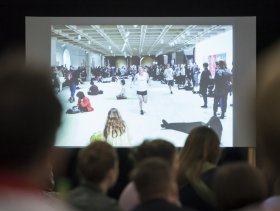 In their collaborative lecture Stars and Tribes, artist Alicia Frankovich and poet Daniel Falb map out the valences and vectors of OUTSIDE BEFORE BEYOND as well as the resonances of their respective practices. Moving stars turn into a cosmic cinema containing the image of the Earth. The everyday becomes a choreography of gestures in networks of repetition that involve humans and nonhumans alike. The museum is activated by performance and today turns out to be the paradigm for an Anthropocene biosphere that seeks to prevent mass extinction and toxic climate change. Dutch philosopher Baruch de Spinoza's 17th-century multitude finds itself immersed in post-fordist working conditions that once were called 'immaterial' but now reveal an ecological footprint as massive as that of the 'cloud.' The present is haunted by complex temporalities, – but does this not entail we are both already post-humans and nameless tribes living in the prehistoire of some remote future? Tracing slippages and questions like these, the lecture seeks paths into and out of OUTSIDE BEFORE BEYOND.

Daniel Falb (b. 1977) is a poet and philosopher based in Berlin. He acquired a PhD in philosophy with a thesis on the notion of collectivity in 2012 and has published three volumes of poetry with Kookbooks, Berlin: die räumung dieser parks (2003), BANCOR (2009), and CEK (2015). His work besides poetry currently focuses mostly on geophilosophy, radical ecology, and poetics. Recent publications include the essay Anthropozän. Dichtung in der Gegenwartsgeologie (Verlagshaus Berlin 2015) and the long poem CHICXULUB PAEM (Ger.-Nl., Druksel, Gent 2016; english version forthcoming at Broken Dimanche Press, Berlin). Falbs work has received various grants and prizes, most recently the German PEN Center's 'Kurt Sigel-Award for Poetry' (2016).

The event accompanies the exhibition Alicia Frankovich – OUTSIDE BEFORE BEYOND, on view at Kunstverein für die Rheinlande und Westfalen, Düsseldorf through April 9, 2017.