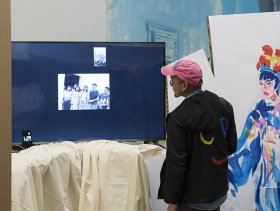 The Live-Stream. A Pearl Is Given Away on the Rainbow Bridge
hobbypopMUSEUM

In the 33th example of the written records from the emerald cliff it is noted :Between the East and the West-, there is no difference. A ball of pearls circles full round, sounding as clear as a bell, the cargo on a donkey, a horse, a camel and a iron boat. Does this refer to the pearl, which is given away on the rainbow bridge? Maybe the communication-bridge, which the hobbypopMUSEUM will builts between the old Europe and the Middle Kingdom on Sunday, October 8th 2017, will offer disclosure on this question. And eventually turn the closing of the exhibition Asymmetric Architextures into a new beginning.

DIE BRÜCKE connects a variety of themes and times. There's Düsseldorf's postwar history as a city of bridges, which is tightly interwoven with the construction history of the Kunsthalle building and the name Tamms. There's the link between the past and the present in the way the work reflects an artistic play with motifs taken from the sphere of traffic infrastructure that has become in some ways typical of Düsseldorf, perhaps most famously in the works of Peter Brüning (Fahrbare Straße, 1969 and Superlandschaft, 1967) or the group Kraftwerk (Autobahn, 1974). There's also the more figurative bridge between Europe and Asia since the installation can also be considered as an associative interpretation of a scene taken from the Beijing opera A Pearl Is Given Away on the Rainbow Bridge, in which nymphs and fairies revel in song and dance on the rainbow bridge. Just where hobbypopMUSEUMS' bridge is coming from or where it's heading remains as open as the question of whether it crosses the Rhine or the Pearl River in southern China, where one member of the group will soon relocate to.

This event takes place on the occasion of the closing of the exhibition Asymmetrische Architexturen – Lektüren zur Nachkriegsgeschichte des Kunstvereins, on view at Kunstverein für die Rheinlande und Westfalen, Düsseldorf through October 8, 2017.