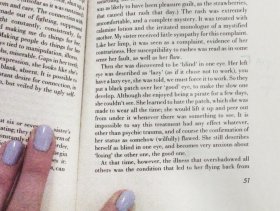 In her video works, textile objects, installations, and performances, Franca Scholz explores the performativity of language and the construction of bodies in the digital era. Language and gestures are the elementary components of her approach, in which she reflects on the conditions of their contemporary material, discursive, pharmaceutical, and socioeconomic determination. Franca Scholz combines, fragments, and reintegrates self-composed texts with quotations from feminist literature. These combinations then appear as spoken and written words in her objects, video works, and performances. Since 2015 she has also been working on collaborations with other artists, performers, and dancers parallel to her individual practice.
For Physical Education III, Franca Scholz has conceived a new performance titled Gentle Collapse that consists of textile collages, movements, sounds, and voices. It reflects on the operations and manifestations of language in relation to questions surrounding body politics and sexuality. Scholz’ collaboration with the dancers Kelvin Kilonzo and Sophia Seiss as well as the artists Phaidonas Gialis and Christi Knak Tschaikowskaja yields images of bodies in alternately resting or exhausting poses. The performers run, unload their bodies, isolate themselves, speak up, keep quiet, look at each other, or look away. In the process, they are encouraged to constantly enter new relationships of tension and power with each other. The textile pieces featured in Gentle Collapse are embroidered with words and sentence fragments—either found ones or Scholz’ own—that describe routine bodily practices, sexual acts, or the emotions of different narrators. Like thought bubbles or fantasies, they break open the linear narrative so that the Kunstverein’s Foyer is temporarily overtaken by a polyphonic collage. In the way that the performers can wear them like clothes and discard them just as easily, the textile pieces function as a bodily tool for articulating and interrogating the ways in which the self is constructed both from within and without.

Elbow Room has been conceived as a performative continuation of the former Schaufenster (display window), which the Kunstverein used to offer young artists their first exhibition opportunities. Elbow Room opens temporary, physically variable intermediary spaces at regular intervals in order to try out and renegotiate various staging formats. The stairs in the entryway, the Kunstverein’s foyer with its bar and panorama window, parts of the exhibition space, even the Salon des Amateurs and the neighboring urban environment will thus be transformed into sites of physical education. Inspired by the idea of rethinking the body and its organs in a flexible and decentralized sense, beyond normative attributions, the title suggests the possibility of creating spaces of action and staging with one’s own body. The elbows, in an expanded sense, thus become the catalysts for stretches and physical exercises that aim to create spaces of play; spaces of play which, in the context of the Kunstverein, offer brief glimpses into ongoing research and developing projects as well as temporary stages for completed works. Elbow Room, Physical Education III, originally initiated by Eva Birkenstock, has been developed in close collaboration with Gesa Hüwe and Victoria Tarak.