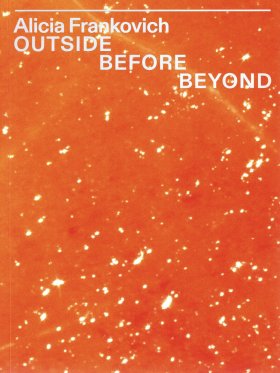 We are very pleased to be able to inform you about our newest publication Alicia Frankovich. OUTSIDE BEFORE BEYOND, which has been produced subsequent to the exhibition of the same name at Kunstverein für die Rheinlande und Westfalen, Düsseldorf (February 18 – April 9, 2017). You are cordially invited to the book’s virtual release: Alicia Frankovich, who now lives in Australia, will present the publication together with the authors Karen Archey and Daniel Falb, as well as Eva Birkenstock, including an introduction, short readings, and a subsequent discussion. We would be delighted if you were able to participate. The link to the livestream will be provided in due course.

On the occasion of the book’s virtual release, Karen Archey will give insights into her research on Frankovich’s interest in the interaction between the public sphere, social discourse and contemporary art, and discusses her practice in relation to concepts of community and assembly. Inspired by the history of contemporary performance art, institutional critique and philosophers and theorists such as Paolo Virno, Karen Barad, Rosi Braidotti and Donna Haraway, Archey reads Frankovich’s work as a new blueprint for socially engaged art. Daniel Falb will read excerpts from his essay Planet and Carrot, in which he traces a recurring but at first enigmatic motif in Frankovich’s work: the superimposition of ordinary food – in particular the skins of fruit and vegetables – with exoplanetary constellations and imaginaries. Looking at the exhibition OUTSIDE BEFORE BEYOND and works such as World Is Home Planet, the essay sheds light on some of her most important tropes – from the “analytical surface” of Mars, the extraterrestrial greenhouse and the vegetative souls of astronomers to “cosmic cinema”. All of these, according to Falb, are based on the idea of a “vegetative exoplanetary community of worship”: a conceptualisation that emerges from an understanding of Frankovich’s recent work as a speculative tool for life on Earth in the Anthropocene.

The first comprehensive monograph on Alicia Frankovich’s works has been produced subsequent to the exhibition of the same name at Kunstverein für die Rheinlande und Westfalen, Düsseldorf (February 18 – April 9, 2017). The bilingual publication (English/German) is structured by central works by Alicia Frankovich from the past five years: beginning with the performance World Is Home Planet (Basel, 2016) and continuing with the temporal exhibition experience OUTSIDE BEFORE BEYOND (Düsseldorf, 2017), the performances Twins and Lovers (Düsseldorf/Glarus, 2017) and Atlas of the Living World (Amsterdam, 2017/Melbourne, 2018), the billboard series After Blue Marble (Bregenz, 2018) and the solo exhibitions Exoplanets (Melbourne, 2018) and Microchimerism (Auckland, 2019). In bringing together essays by Karen Archey (Stedelijk Museum, Amsterdam), Prof. Rosi Braidotti (Utrecht University), Daniel Falb (poet and philosopher, Berlin), and curator Hannah Mathews (Monash University Museum, Melbourne) with an introduction by Eva Birkenstock and the extensive photographic documentation of the exhibition situations and performances as well as transcripts, scripts and call-outs, OUTSIDE BEFORE BEYOND attempts to lay a foundation for a long-term academic engagement with Frankovich’s unique work.

Karen Archey is a curator and art critic formerly based in New York and Berlin. Since 2017 she is Curator of Contemporary Art, Time-based Media at the Stedelijk Museum Amsterdam. In 2015, she was awarded the Creative Capital | Andy Warhol Foundation Arts Writers Grant. Daniel Falb (born 1977) is a poet and philosopher. He lives in Berlin, where he studied philosophy and earned his doctorate with a thesis on ‘collectivity’. Falb’s work has received numerous scholarships and prizes, and in 2016 he was awarded the Kurt Sigel-Lyrikpreis of the PEN Centre Germany. Artist Alicia Frankovich´s (born 1980) most recent institutional exhibitions include Fluidity at Zentrum für zeitgenössische Kunst (Syke, 2020), Exoplanets at Monash University Museum of Art (Melbourne, 2018) and OUTSIDE BEFORE BEYOND at Kunstverein für die Rheinlande und Westfalen (Düsseldorf, 2017) amongst others.