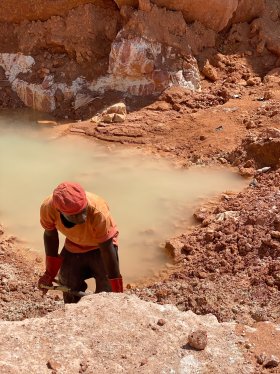 Another Eye: Karimah Ashadu with Kathrin Bentele
Screening and talk

For the third edition of Another Eye, the Hamburg/Lagos-based filmmaker Karimah Ashadu will present her film Plateau (2021–2022), which addresses the labor of tin mining in Nigeria’s Jos Plateau region, a grassy highland in the country’s center; a historical nexus every bit as closely linked to the population’s current living conditions as it is with the country’s history. Across several sequences, Ashadu gives miners, villagers, and a landowner space to relay their social and economic exploitation by British colonial forces until the mid-twentieth century. In images both aesthetic and observational, Plateau follows the challenging and at times life-threatening work of tin-mining. From the first sequence, Ashadu draws viewers into the rugged landscape of the region and into a tin mine, where we follow a barefooted worker walking across the soft, ochre-colored floor toward his workstation; we observe his hands, submerged in yellow water and working the subsoil with determination – stoking and churning the earth with a shovel, a metal sheet set between feet covered in mud and buried into the environment. Ashadu’s careful use of the camera adapts to the movements of the workers, creating a rhythm from its alternating close-ups of body movements with smooth, more distant panning shots across the landscape of Jos Plateau. These scenes are accompanied by the testimonies of local people whose lives are interwoven with the manual labor: mineworkers whose parents, under the orders of the colonialists, dug the land in search of natural resources; a landowner who today leases his land, placing it at the disposal of self-employed workers. The plowed fields here symbolize narratives of violent occupation and its aftereffects—and the search for a self-determined future.

The screening will be followed by a conversation with Kathrin Bentele, director of the Kunstverein.

Steadfast (research image – Plateau, 2021), courtesy of the artist and Fondazione in Between Art Film with thanks to neue Kunst in Hamburg e.V