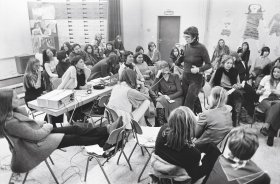 Based on her ongoing research into the First International Women's Film Seminar, artist Arisa Purkpong has selected two films to be presented as part of Another Eye: in Claudia von Alemann’s Blind Spot (1981), protagonist Elisabeth travels to the city of Lyon to investigate the (audio-visual) realities of socialist and feminist Flora Tristan’s (1803–1844) life—and to reconstruct them against the backdrop of Tristan’s patriarchal historicization. It is through Tristan’s diaries that Elisabeth experiences the city and its visual and auditory textures—and that she comes to understand it through her own fragmentary research.

The Woman's Film (1971), released a decade earlier, documents the early stages of the second-wave feminist movement in the United States. A broad range of women come together as a community to share their personal experiences of their roles as wives, caregivers, and workers—and of discrimination, racism, and toxic relationships. Produced by San Francisco Newsreel, a feminist filmmaking collective, the movie gives an insight into women’s daily lives in the early 1970s—retaining its relevance even fifty years later. The Woman’s Film was also one of 45 films Claudia von Alemann and Helke Sander presented at the First International Women’s Film Seminar in 1973; the event is now considered the world’s first international festival to focus on films by and about women. Its participating filmmakers and artists critiqued the way in which the patriarchal culture of conventional cinema depicted female stereotypes and female social roles while also questioning the omnipotent “male gaze”. It also offered a general critique of working women’s living conditions, seeking in particular to draw attention to structural discrimination against women and campaigning for the improvement of political and social conditions.

Arisa Purkpong (born 1995) is currently studying under Trisha Donnelly and Christopher Williams at Kunstakademie Düsseldorf where her research into the First International Women's Film Seminar led her to host a screening in February 2020 as part of the Christopher Williams class’s film program at the Black Box cinema in Düsseldorf. Arisa Purkpong’s works have been shown in group exhibitions at venues including Sammlung Philara (2021), the project space Baustelle Schaustelle—Raum für junge Kunst (2020), and at KIT—Kunst im Tunnel (2019).

Another Eye is a new series for film, video, and related talk formats at the Kunstverein für die Rheinlande und Westfalen, Düsseldorf. Conceived to expand upon previous formats such as the display window shows (2008–2017) and the Elbow Room series (2019-2021), which offered younger artists an opportunity to make their first institutional presentations at the Kunstverein, Another Eye is dedicated to practices in film, video, and animation. With events taking place four times a year in the foyer of the Kunstverein and other locations in the city, the series provides young artists a space for presenting new work and ongoing research. Following a period of social isolation, Another Eye creates a collective framework for the negotiation of different cinematic practices and contemporary discourses, and for experimenting with new presentation formats for film and cinema. The series thus sustains an interrogation of the contemporary significance of artistic moving images in the “post-cinematic” era, in which the distribution, production, and consumption of film and video have radically changed. The title refers to the Kunstverein’s window facade, which offers a broad, almost panoptic view unto Grabbeplatz—and vice versa. The idea of an enormous architectural eye that negotiates between views of interior and exterior space is carried over to the projection screen, where these are temporarily replaced by other, filmic views. For Another Eye, Düsseldorf-based artist Mira Mann developed a new display system which—like blinds, shades, and other kinds of window covering—invokes an idea of shielding while also playing with porosity and reflection. The temporary space thus emerging offers delineation and protection, while opening up other, fictional spaces.

In the two weeks following each event, the films and research materials presented will remain present in the Kunstverein’s foyer and will be accessible to interested visitors.

Another Eye is curated by Kathrin Bentele and Gesa Hüwe.

The second edition of Another Eye is taking place as part of düsseldorf photo+.

Another Eye is supported by
Gingko Foundation