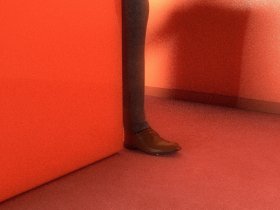 Another Eye: Fynn Ribbeck with Marcel Odenbach
Screening and talk

Another Eye is a new series for contemporary film, video, and related talk formats. Conceived to expand upon previous formats such as the display window shows (2008–2017) and the Elbow Room series (2019-2021), which offered young artists an opportunity to make their first institutional presentations at the Kunstverein, Another Eye is dedicated to practices in film, video, and animation. With events taking place four times a year in the foyer of the Kunstverein and other locations in the city, the series provides young film and video artists a space for presenting new work and ongoing research. Following a period of social isolation, Another Eye aims to create a collective framework for the negotiation of different cinematic practices and discourses, and for experimenting with new presentation formats for film and cinema. The series thus sustains an interrogation of the contemporary significance of artistic moving images in the “post-cinematic” era, in which the distribution, production, and consumption of film and video have radically changed. The title refers to the Kunstverein’s window facade, which offers a broad, almost panoptic view unto Grabbeplatz and vice versa. The idea of an enormous architectural eye that negotiates between views of interior and exterior space is carried over to the projection screen, where these are temporarily replaced by other, filmic views. For Another Eye, Düsseldorf-based artist Mira Mann has developed a new display system which—like blinds, shades, and other kinds of window covering—invokes an idea of shielding while also playing with porosity and reflection. The temporary space thus emerging offers delineation and protection, while opening up other, fictional spaces.

To launch the series, Fynn Ribbeck (lives and works in Düsseldorf and Wuppertal) will present his latest animated film Lesson of the Airplane (2021) and, in conversation with video artist Marcel Odenbach, will give insights into his ongoing research and practice.

It’s a frequently repeated scene: small, box-like cars driving away in a column as if tied together on a string, through suggested blank-and-white landscapes that are both interior and exterior. Elsewhere they remain motionless, headlights on, either lined up uniformly on the road in front of architecture that evokes the International Style or in some anonymous location that could well be a public car park. The characters, forms, and structures that Fynn Ribbeck models are collaged together freely and frequently, placing them in differing contexts. The figures and objects thus do not retain their original meanings, making it possible for them instead to be situated into new works, into entirely new combinations. Based on (personal) recollections and dreams, Ribbeck sparingly uses the medium of animation to narrate highly atmospheric impressions and moods that elude the laws of the real world. Architecture significantly shapes each scene in his video works, assuming a role that goes way beyond being a mere backdrop for moving or stationary cars. This is also true of his latest animated film Lesson of the Airplane (2021), which narrates a fictional dream of the journalist and Red Army Faction terrorist Ulrike Meinhof: minimalistic depictions of the architecture of power and of stylized 60s and 70s interiors alternate with imagined dream sequences that emerge as mirrors of the protagonist’s personal and political motivations. Images both abstract and well-known—some modelled on press photos of the time—merge into one another, deconstructing Meinhof as a political figure. The unreality shared by Ribbeck’s works is enhanced by the sometimes unsettled surface structure of the rendered images. A visual flickering emerges, like that of an elusive memory which recedes even further with every attempt made to capture and visualize it. Like a dream that disappears in the morning to be superseded by reality.

Fynn Ribbeck (born 1995, lives in Düsseldorf) studied at Kunstakademie Düsseldorf under Rebecca Warren and Marcel Odenbach, completing his studies last year as a Meisterschüler (master student) of Dominique Gonzalez-Foerster. His works have been shown in group and solo exhibitions at venues including Kunsthalle Düsseldorf (2019), Kunstmuseum Solingen (as part of the 75th International Bergisches Land Art Exhibition), and Cologne’s Moltkerei Werkstatt (both 2021).

In the two weeks following each event, the films and research materials presented will remain present in the Kunstverein’s foyer and will be accessible to interested visitors.

Another Eye is curated by Kathrin Bentele and Gesa Hüwe.

For this event, the 3G rule applies.