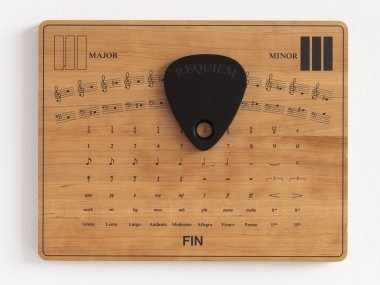 The Ouija is a means of communicating with the beyond. Each letter of the alphabet and the numbers 0 through 9 are laid out on its surface, in addition to the words “yes,” “no,” and “goodbye.” The users pose questions, lay their fingers on a small pointer or planchette, and let it glide over the characters seemingly of its own will until a message emerges. Originally conceived as a party game, the Ouija Board soon became popular among spiritualists after it was released in 1891, especially in the USA and Great Britain. During the First World War, it developed into a popular tool for connecting with the deceased. In takin up the Ouija Board’s form and transferring into the sphere of music for his requiem, Ari Benjamin Meyers mixes play with seriousness. In his version, the numbers and letters have been replaced by the symbols of modern Western musical notation. Instead of “yes” and “no,” one finds the musical modes of major and minor. However, it seems that he’s not just interested in conjuring the ghosts of deceased composers to his aid. Rather, Meyers also raises the question of what it means to compose at all. Is there inspiration at work, or is it just chance? It’s no coincidence that Requiem (Ouija) evokes both the 19th-century cult of genius and the chance operations of conceptual music – much like the boardgames by Fluxus artists, who were similarly interested in the relationship between coincidence and aesthetic practice.